The Village Inn and Tavern, 157 Main St., Belgrade Lakes, ME

The weekend runs Friday, June 21 at 5pm thru Sunday, June 23 at 3pm. I'll be teaching fiddle this weekend.

Cindy Kallet and Grey Larsen, each well-known and loved for their decades of music making, have spent well over a decade in a joyful musical collaboration. Cindy is a superb singer, guitarist, songwriter, and multi-instrumentalist. Grey is one of America’s finest players of the Irish flute and tin whistle, as well as an accomplished singer and concertina, fiddle, piano and harmonium player. As composers each contributes to the unique tapestry of contemporary folk and world music as it flourishes in the US today. Together, they weave songs and tunes of vibrant color and rich texture. Their music is remarkable for its vibrant colors and intricate textures, rewarding the listener with a level of nuance and craftsmanship often compared to that of fine chamber music. The duo’s repertoire includes Cindy’s sparkling original songs, distinctive settings of traditional Irish music, Scandinavian fiddle duets, old-time fiddle and guitar tunes from southern Indiana, and new music that Cindy and Grey are inventing together. There is plenty of variety and breadth of musical territory here, all deeply rooted in folk traditions, and interwoven with the renaissance and baroque counterpoint in which both Cindy and Grey, coincidentally, were immersed while growing up. Included are vocal duets, guitar, Irish flute, Irish alto flute, tin whistle, concertina, harmonium, and duet fiddling, and plenty of stories that put the music into a personal context. In 2007, they released their widely-praised first duo recording, Cross the Water. In 2010, they produced a single, and YouTube video, Back When We Were All Machines, a playful, humorous look at the serious subject of our modern paradox of human connection and disconnection. In 2015, they released their second full-length CD, Welcome Day. 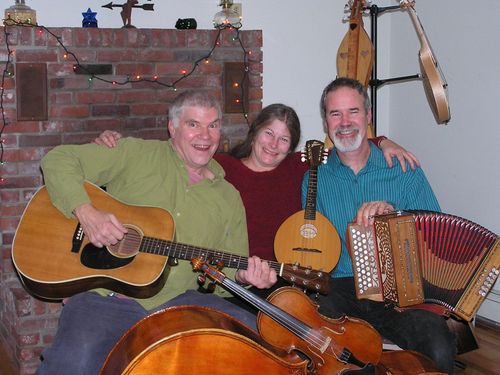 Tonight.. T-Acadie presents: "Lesser Known Gems of the Holiday Season" a holiday concert at the home of Pam Weeks! Pam Jim and Bill in concert singing and playing "rare" holiday and seasonal songs and tunes on fiddle, banjo, button accordion, mountain dulcimer, mandolin, cello, hammered dulcimer, guitar, bass, a cappella vocals, probably more.. Quebecois, Cajun, Celtic, Old English, southern Appalachian, local Maine songs, Gospel, Doo Wop, Sea Songs, more!!!  This concert will follow the normal house concert format: gathering together and possible jam session at 5PM, followed by pot luck (bring a dish or beverage). Concert 7-9PM. Suggested donation $20 but more or less is OK. All proceeds go to the Mid Coast Hunger Prevention Program in Brunswick, Maine. Do what you can but please come and join the party and BRING A FRIEND!! reservations suggested but no one will be turned away!.
Reservations are encouraged for all concerts, to reserve a seat or for more info: pam@pamweeks.com, or call 207-666-3709